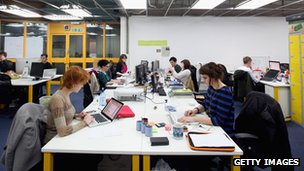 A major new programme to support fledgling technology start-ups in the UK is to be launched in the 2013.

Cloud hosting firm Rackspace is to offer £12,000 of hosting and mentoring for start-ups on the programme.

The launch comes as the government continued efforts to encourage successful UK start-ups to float on the stock exchange.

A survey of more than 50,000 entrepreneurs ranked London as the seventh best city to launch a start-up.

The report, by telecoms firm Telefonica, concluded that the UK’s offering was «no Silicon Valley» – due mainly to a lack of investment and what is perceived as a risk-averse investment culture.

But Rackspace, whose start-up programme has aided more than 850 US start-ups in their early stages, said they felt the timing was right to launch its push in the UK.

«If you go downstairs [at Google Campus] you can see dozens of start-ups working at tiny little tables,» he told the BBC.

«This feels a lot about how I saw Instagram for the first time – two guys sitting at a table coding like mad, two years later they’re worth a billion dollars. It has that feel to it.»

Rackspace is one of the world’s largest cloud hosting firms – second only to Amazon.

The cloud, as it is known, is a term given to storing data on servers in a variety of locations – rather than on a local machine.

Cloud hosting gives small companies flexibility when starting out. Rather than pay for the rental of dedicated servers, which can be expensive, it means start-ups can just pay for what they need.

In September, the government announced plans to loosen regulations surrounding companies that wanted to float on the stock market.

The move, which was backed by several of the country’s largest investment firms, would provide a «new route» to an initial public offering (IPO), universities minister David Willetts said.

A successful British IPO would be seen as a major success for the government’s Tech City initiative – an organisation designed to promote the interests of UK-based start-ups globally.

Mr Scoble said the key to a successful flotation was in the timing – and that chasing the «next Facebook» may not be the right move.

«In Silicon Valley the venture capitalists are telling me they’re moving investment away from consumer and into enterprise because they’re seeing that the consumer markets are too risky.

«They’re investing less in consumer kinds of things – they’re trying to get the kids to focus on the enterprise market.»